Before making their own, Steve Frazier and his wife Brenda had EMF protection in their home for several years due to Brenda’s inability to methylate toxins created by EMFs. One Christmas, they were going to buy pyramids for all eight of their grand children when their daughter suggested that Steve make them himself. He said he would if they tested well, which they did, and the rest is history. Today on OHH, Steve chats to us all about EMFs, 5G, and how orgonite can help mitigate the harmful effects we’re now dealing with.

Can you explain what orgonites are? Orgonites / orgone is created by mixing resin, crystals, and metal. When the resin hardens and cools, it contracts, putting constant pressure on the crystals and metal. This action creates piezoelectricity … the magic of orgone. It generates a field that harmonizes / mitigates the chaotic negative EMFs (electromagnetic frequencies) and turns them into positive EMFs, which cause no harm to the cells in our bodies.

What is your process of choosing the various ingredients of each orgonite piece? In order to be effective, all orgonites must have resin, crystals, and metals:

When making any piece, I go in having a general idea of what crystals and metals I will be using, but ultimately create as I go. It’s quite exciting to take pieces out of their molds, because while I know what went in, I don’t really know what it’s going to look like until I take it out. Surprise! We do make custom pieces for special occasions or even place special items inside, which is a great way to have a permanent memory of something since orgonite will last many years unless dropped. And I do repair my pieces at no charge if they are broken or chipped.

“it’s quite exciting to take pieces out of their molds, because while i know what went in, i don’t really know what it’s going to look like until i take it out.”

How do you test the effectiveness of your orgonite pieces? We use MFT (Morphogenic Field Technique) to test all of our pieces at this time. A practitioner can tell you what crystals are best for you and will then show you the strength of your field with that piece. MFT saved my wife Brenda’s life when no doctor could, so I trust MFT. And MFT can demonstrate how orgonites harmonize negative EMFs. If you have the opportunity to be tested, it’s quite an enlightening experience. There’s nothing like seeing the effects of the orgonites through muscle testing, right before your very own eyes. 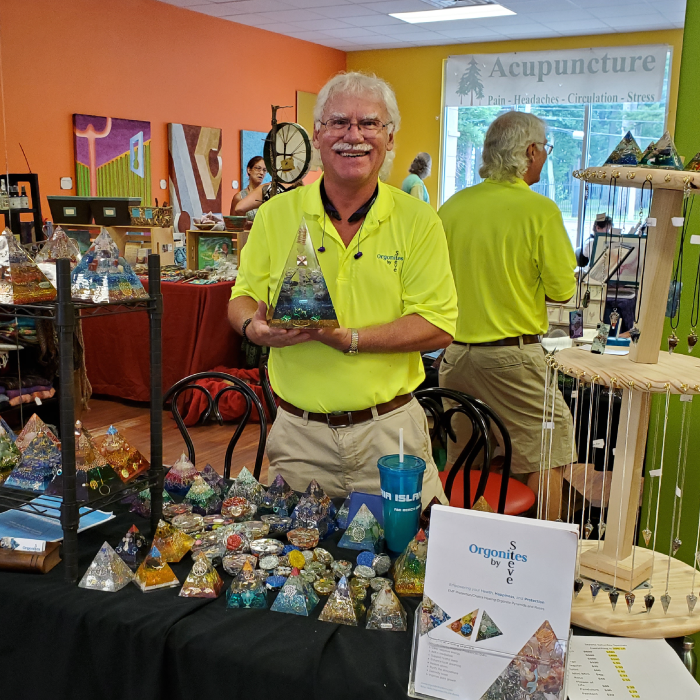 What are some of the health and wellness benefits of using an orgonite pyramid / pendant?

“emfs are the biggest threat to our health since cigarettes and orgonites mitigate the harmful effects.”

You’ve mentioned EMFs a lot. Why should we be worried about them? EMFs are the biggest threat to our health since cigarettes and orgonites mitigate the harmful effects. These effects have been proven by a study from the National Toxicology Program, which was commissioned by the FDA. The study was conducted on mice and rats using 2G and 3G cell phones. It proved quite conclusively that exposure to these types of EMFs caused brain and heart tumors in both mice and rats. Ironically, the FDA dismissed the study, saying it wasn’t relevant because mice and rats aren’t human.

* It’s important to note here that mice are the most commonly used animal model for studying human disease, and for many good reasons. Mice are biologically very similar to humans and get many of the same diseases, for the same genetic reasons. Mice can also be genetically manipulated to mimic virtually any human disease or condition.

These studies were done using 2G and 3G. The newest systems, 5G or fifth generation, are even more powerful and pulse more often than any of the other previous generations. Meaning, they are most likely exponentially more dangerous. Think of it this way. Once 5G rolls out nationwide (and it’s in many places already), it will ping any 5G enabled device 1,000 times per second. So if you are sitting at a table in a restaurant with 30 people who have 5G enabled devices, you will be exposed to 30,000 EMFs per second.

Unfortunately, there have been no studies on the short or long term effects of 5G on humans, animals, or plants. Instead, they are being put into place with no regard for the consequences. Fortunately, if we are inside of a field created by an orgonite piece, it will harmonize the negative EMFs and turn them into positive ones, with no harm done to our cells. We have tested our pieces on all types of EMFs, including 5G, and they are effective. Please, protect yourself.

﻿You offer various orgonite pyramid sizes and smaller pendants. What is the benefit of having one over another? And how can people choose which piece is best for them? Size matters! The bigger the piece, the larger the field around it is created. For example, a large pyramid will have a field radius of 12-16 feet, which if placed in a normal sized room, will cover it all. Carrying around a sharp pyramid isn’t very practical, though, so we have personal pieces that can be carried for non-stop protection as well. Our rose is great for purses, diaper bags, or cars, with a range of 4-6 feet. Our flower of life is perfect for pockets (I carry one with my cell phone), with a range of 2 feet. And finally, we offer pendulums and pendants, which also have a field of about 2 feet. The necklace types protect the head and upper torso. While each individual needs to decide what’s best for them, our options allow them to be protected at home and on the go.

Through muscle testing, we have found that orgonite is more effective closer to the person, not closer to the source of EMFs. This means that if you have a WIFI router in your home, there needs to be protection from it in the rooms you are most regularly in.

“fortunately, if we are inside of a field created by an orgonite piece, it will harmonize the negative emfs and turn them into positive ones, with no harm done to our cells.”

What would you say to someone who is skeptical about using orgonite? Results, results, results! We are a results driven business. Most people who buy one piece buy more so they can be protected wherever they are or wherever they go. We have many testimonials on our website and I would be happy to share many more stories if someone has doubts. Here are just a few:

The amount of people who sleep better, have better focus, and overall better health show their effectiveness. Our customers are our proof!